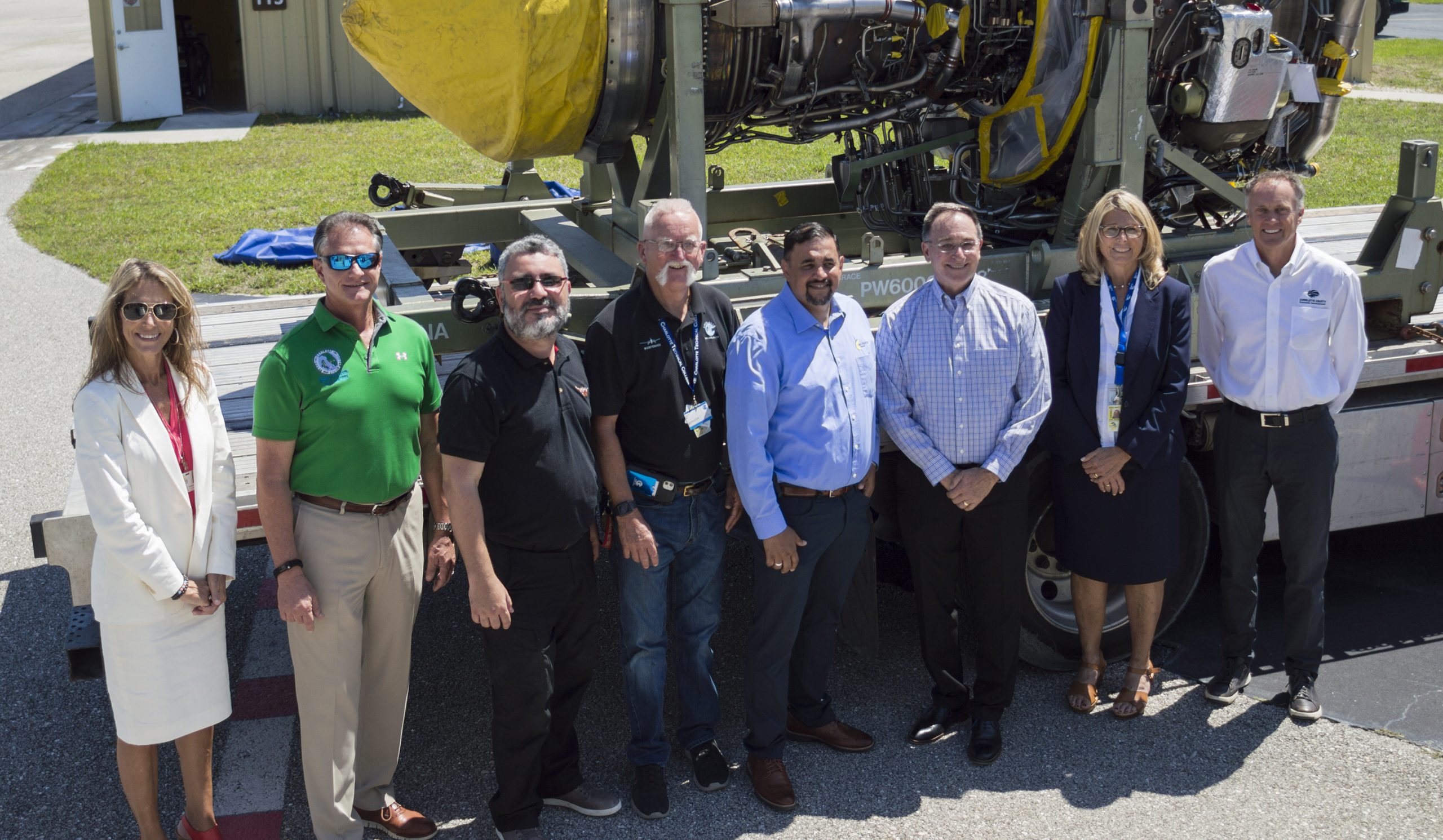 PUNTA GORDA, FLORIDA, April 22, 2021: At Charlotte Technical College’s aviation extension campus, the hands-on learning experience for aviation airframe and powerplant mechanic students now soars head and shoulders above training at other aviation schools, thanks to the addition of a Pratt & Whitney PW6000 turbofan engine given to the program by Patrice Robinet, Managing Director of Halcyon Aviation Capital.

Worth well over $2 million and weighing in at 5,000 pounds, the engine will allow for a training experience that puts CTC students in “an elite category,” according to Stephen Nowell, founding manager of the CTC Aviation and Powerplant (A&P) program and 40-year veteran of the aviation maintenance industry. “While knowledge of turbine engines is required for the FAA’s A&P certification exam, mechanic training rarely involves experience with a new turbine of this caliber,” he notes. “This is a once-in-a-lifetime training opportunity.”

As a turbofan, the PW6000 offers higher thrust and fuel efficiency, with lower noise, allowing flights in a broader range of airports. Designed for use in 100-passenger aircraft, the engine was first adapted for use in 2005 in the LAN Airlines Airbus A318 passenger plane—the same Airbus model used by Allegiant Air flying from Punta Gorda Airport today.

Frank Rodriguez of Intrepid Aerospace and Sam Albornoz of Aerotech Ops (ATOPS) have been coordinating delivery of the engine from Miami to Punta Gorda over the last several months.  The engine was delivered by ATOPS on its flatbed truck on the morning of April 22, 2021.

“Our students will graduate with true ‘front-line’ experience,” Nowell points out. “That’s something few schools can offer. In fact, most use non-airworthy military engines for training.”

While the donation is a coup for the newly inaugurated program, which began admitting students February 1, 2021, Deelynn Bennett, CTC Director, believes the high quality of CTC students makes them the ideal match for such cutting-edge training equipment.

“We’ve been able to recruit topflight mechanic candidates,” she says. “While there’s an urgent need for aviation mechanics both in our region and across the nation, there’s also a real hunger for the opportunities the field provides. Aviation mechanics is financially rewarding and professionally stimulating. And now with this level of training, the sky really is the limit for our graduates.” 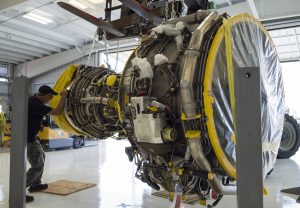 In anticipation of the engine’s delivery, CTC instructors Martin Ricciuti and Jamie Trudeau engineered and fabricated the engine stand on site at the program’s hangar located at Punta Gorda Airport.

Frank Rodriguez, Intrepid’s Vice President of Sales & Marketing, is also an advisory board member for CTC’s A&P program. Understanding just how important a new-generation jet engine is to world-class student instruction, Rodriguez began making calls to his aviation-related contacts several months ago. Since jet engines like this can be disassembled and sold for its precious metals, it took some convincing for its owner to part from it.

“Sam Albornoz identified the potential donation from Halcyon, and since we both share this passion for aviation education, we were able to convince Mr. Patrice Robinet that CTC would be a worthy recipient of such a valuable asset and educational tool,” said Rodriguez. “We’ve all worked together with CTC to assemble all the fundamentals, in instructional staff, curriculum and now, equipment, for a world-class program. This is an important step forward for CTC and for Florida aviation.”

With the unveiling of the PW6000 at its new home, CTC students also expressed excitement about the opportunity to get “hands-on” with the engine, and about the advantages it brings to their training, and ultimately to their careers.

Allegiant to Host Job Sessions for A&P Technicians on Feb. 22